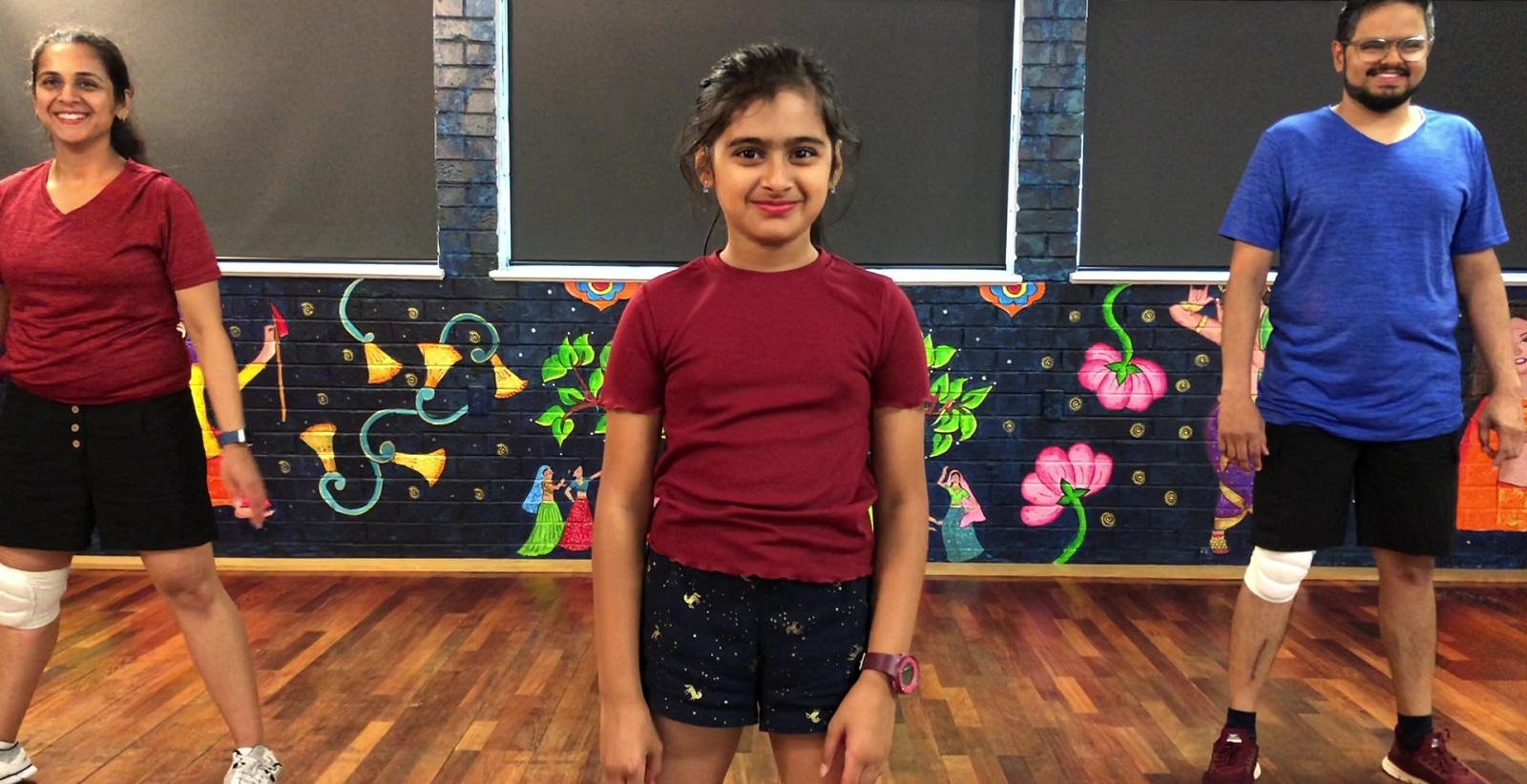 “It was a great bonding experience. Normally you just talk about your usual stuff at home, like groceries, work, watching a movie… rather than actually sitting and talking with each other. Because of the dance class, there were so many conversations around it at home.
Plus, it was so delightful to watch each other dancing.”

Anusha, a regular student in our Bharatanatyam class, recently enrolled in the South Indian Street course with her husband (Hari) and her nine-year old daughter (Ish). This beautiful family completed the full term in March 2021. Read on to see how it transformed their week.

What prompted you to join as a family?
Anusha: We love listening to film songs. During lockdown, we used to dance at home together quite a lot. Especially Ish, she’s a big South Indian movie buff.

Hari: To be honest I was very hesitant to join the class. Anusha encouraged me to try it out, and it was great fun. I just wanted to have a good time as a family, with the three of us.

Anusha: I knew Hari would enjoy the class, that’s why I kept pushing him to join. I wanted him to experience what I feel when I dance. And I was so happy when I saw that he was genuinely loving it.

Hari: I really liked the atmosphere. It’s not just about the dance; it’s about the people and the entire environment. From the warm-up itself I used to get a high because the music is so great. And then I started to long for it every week (laughs).

Anusha: And we LOVED Anagha! She’s such an energetic fire ball!

Ish, how did you feel joining a class with your parents? It’s very unusual.
Ish: I really liked it because I wasn’t there alone with strange people.

Anusha: We had to bribe Ish with ice-cream after the classes. She said it was too much hard work! (Laughs)

How was it preparing for the video?
Ish: I was a bit nervous of making mistakes.

Hari: I was very nervous for the entire day. I couldn’t sleep the night before. I thought I might forget my steps.

Anusha: OMG, Hari practised like crazy. About three times a week, he played the entire video of the class, and he would watch what Anagha does, what he is doing and what every other person is doing. And then I felt, “Oh maybe I should also practice more” I felt very competitive with him! (Laughs)

Hari: Actually, I didn’t want to be a show spoiler for everyone else. But also, it was really fun to practise. I found dance to be very relaxing. It takes your mind away from all your other regular stuff. The experience was much larger than just going to a class. It was the class, then practising at home, watching the videos; the entire process and journey was really enjoyable.

Hari: It was a great bonding experience. Normally you just talk about your usual stuff at home, like groceries, work, watching a movie, rather than actually sitting and talking with each other. Because of the dance class, there were so many conversations around it at home. Plus, it was so delightful to watch each other dancing.

Anusha: I always tell Jaya – Studio J is like a second home to me. If there was a possibility, I would join all the classes.